Arguing Your Case in Tax Court

Come to court a little early; judges hate tardiness. It will also give you time to find parking, find the right room, and to orient yourself. Court sessions are held weekdays during normal business hours—no evenings or weekends. Proceedings are usually held in a federal building.

The judge sits in an elevated area, called the bench, or at the end of a conference table. It’s hard to generalize about tax court judges. Most are patient souls, giving you all the time needed to present your case. Judges are assigned randomly, so there is no way you can pick a particular one, or request a change. It’s doubtful you’d ever know a tax court judge anyway. The rest of the cast of characters present are the judge’s clerk, a stenographer called a court reporter, and the IRS lawyer.

The first day in court is when they hold what’s called a “calendar call” of all cases set for that session. Don’t expect to have your trial that day. Instead, the judge is likely to assign a specific date and time to come back for the trial—usually later that week or in the next one.

You might be told to call in or to expect a phone message with the exact date and time of your hearing. If the date is impossible for you or your witnesses, ask for another. Most judges are flexible a few days, one way or another. If your witnesses have limited time, don’t have them come with you for the calendar call. Have them on telephone standby, however, in case the judge has you proceed that day or you need to check their availability for a later date.

If you live far from the tax court trial city or have trouble with your work schedule, call the court clerk or IRS lawyer in the week before your court day. Ask for permission not to appear until the day your case will actually be heard. Whether your request is granted depends on the judge. Most try to be accommodating.

If you get cold feet at the last minute, hire a tax pro.

When you return for your actual trial, come early to observe another trial and get comfortable with the surroundings. Wait for the clerk to call your name. When that happens, answer that you are present and ready for trial. If you have a problem, ask that your case be continued. You must have a very, very good reason—a serious illness, death in the family, or catastrophe like an accident involving a crucial witness on the way to court. Any lesser excuse won’t do. The judge came from Washington, DC, to hear your case come hell or high water.

You will be invited to sit at one of two tables facing the judge. The IRS lawyer will be at one, so finding your spot won’t be difficult. Bring your trial notebook and evidence binder and arrange them on the table. If anyone is assisting you or there for support, tell the judge who they are and ask permission to have them with you at the table. Your witnesses should be sitting in the public area behind you.

If you and your spouse were audited, only one must attend the trial. But it makes a better impression when both of you are present.

Although tax court trials are open to the public, few spectators attend and trials aren’t usually newsworthy. In fact, they are deadly dull affairs to everyone but you, and far removed from TV trial dramas. But for you, the trial is your opportunity to tell your side of the story.

The typical S case trial lasts less than two hours. The judge will grant you more time to present your case if you need it. He’s not likely to recess the trial, however, if you forgot some documents or a witness doesn’t show up.

The judge knows little about your case before the trial begins. His file contains only your petition (with the notice of deficiency and examination report attached), trial memorandum, and stipulation of facts. The judge doesn’t have any IRS files. Neither will he have anything that you submitted to the auditor or appeals officer. You must start from scratch in educating the judge.

To begin the trial, you and your witnesses are placed under oath to tell the truth. Next, you’re asked to present your case. Ask if you can give an opening statement. The judge will tell you to proceed. Don’t read it word for word—that’s stiff and unnatural. You’ll be okay if you rehearsed it at home or in front of friends. The judge doesn’t expect you to be a lawyer or tax law expert.

After making your opening statement, pass out duplicate binders to the judge and to the IRS lawyer.

The judge wants to hear your story and see your evidence. Don’t leave out any relevant details. Explain how your tax return was prepared. If you are giving too much detail, the judge will let you know. At the appropriate times during your presentation, direct the judge and IRS lawyer to evidence or legal authority in the binder you’ve given them. The judge or IRS attorney may want to look at your originals.

As you tell your story, call your witnesses, if any, to testify. For example, say, “I’d like to call Ms. Scarlet to the stand.” The judge will grant permission for the witness to come forward and be sworn in.

Your witness doesn’t simply tell what she knows. You must ask questions. This is a courtroom technique that will seem awkward to you, so write out the questions ahead of time.

Recall the ScamWay distributor whose losses were disallowed by the IRS. Here are sample questions for Scarlet, a neighbor and friend:

Once you are done presenting your case, it’s the IRS’s turn. The lawyer’s presentation will be much like yours. If the IRS lawyer calls any witnesses, you can ask them questions. Do not interrupt the IRS lawyer. Respectfully and quietly listen to the presentation.

Once the IRS finishes, ask permission to sum up the case—to give your closing statement.

While the judge may announce a decision at the end of your trial, don’t count on it. Judges don’t usually announce their decisions in court, to avoid debates with sore losers. Instead, expect to receive the decision in the mail within a few months. 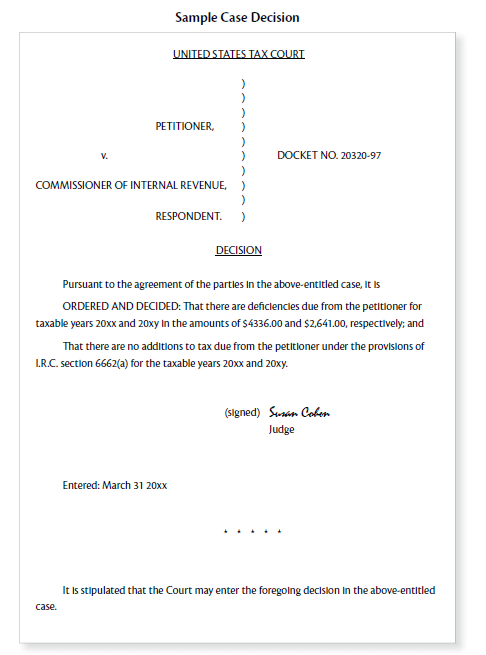 In S cases, judges often don’t give detailed explanations of why you won or lost. The decision won’t show the final amount owed to the IRS, either; interest gets added on later in your bill from the Service Center. The judge’s decision is final. You cannot appeal an S case decision.

If you want to contest in tax court an audit outcome of over $50,000 for any one year, your case will be considered a regular case. Most people hire a tax pro to represent them when arguing a regular case, Most cases settle before ever reaching a judge, which may be why so many people are able to represent themselves. You can appeal a regular case decision to a higher court, but it’s far too complicated to do without a lawyer.

If your case reaches the trial stage, the judge may not be that patient with a taxpayer representing him- or herself. Strict court procedures and rules of evidence apply. After the trial, you must submit a formal legal brief. This is a highly technical document and anything but brief. You must comment on evidence produced at trial, legal theories, and tax law precedents.

Need help with your tax court case? Reach out to the tax law firm of ____ for a free 15 minute consultation with one of our tax attorneys. We represent clients nationwide have been helping clients stand up to the IRS for over 40 years.

Bishop L. Toups is an estate planning, elder law, and tax attorney in Southwest Florida. He helps clients with their various estate planning needs and helps clients navigate the Medicaid system here in Florida. He also represents clients nationwide and worldwide in front of the IRS. Bishop is also a V.A. accredited attorney and helps Veterans obtain benefits from the Department of Veterans Affairs.